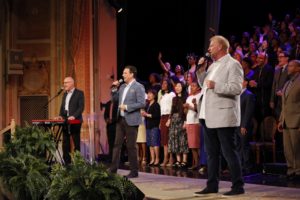 When Dan Dean steps up to a microphone and belts out a ballad, there’s no mistaking the truth — the man can sing. Although his career as “Dean” in the award-winning Christian music group Phillips, Craig and Dean has taken him all over the world, he spends most of his working hours at Heartland Church in Carrollton, where you can find him crooning to his congregation after a sermon or, more often, washing windows and spending time with his flock.

I understand the Heartland Church was originally a church located in Irving. What brought it here? What brought you here?
Heartland [Church] was located in Irving for many years. A series of events starting with the crash of the housing market in 2008 led us to move to Carrollton in 2010. We had purchased land and were planning to build on [state highway] 161 in Irving. We were two weeks from getting our construction loan for that property. In hindsight, we are thankful the loan didn’t go through. However, we had already sold our campus in Irving and we were being displaced. We found the building for sale in Carrollton. It was a move of 22 miles from our Irving campus. Naturally there were many who couldn’t make the journey because they lived south of the Irving campus. What amazed us was that what we lost as a result of the move, we made up for in new attendees on the very first Sunday.

You have had a very interesting career. How did you get started singing and how do you manage both that and being a pastor?
I started writing and singing songs in my late teens. It was a gift my mother recognized in me and she wouldn’t let me lay it down (although I tried on many occasions). I eventually studied music in college and started writing and singing in a serious way. I had my first song that I had written recorded by a major Christian artist at the time while I was still in college. I started trying to pursue a solo career in Christian music shortly thereafter. As with any person who has had any success at all as an artist, I paid dues for a number of years. I would sing at any venue/church that would allow me. I traveled with my gear in a U-Haul trailer and did it all–set up, tear down, concessions, singing. I recorded my first solo album in 1988 and saw some limited success with that album. Randy Phillips called me in the summer of 1990 and Phillips, Craig, and Dean was launched in the spring of 1991. While it would appear on the surface that our success was instant, there was a lot of hard work behind the scenes for a number of years.

Regarding life as a pastor, I didn’t start out as a lead pastor. In fact, I never had any plans to do so. I was the worship pastor for 16 years at the church where I am now the lead pastor. At various points during that period of time I would fill in for the lead pastor. During the end of the 90’s, he started experiencing health issues and I started doing more and more of the speaking and leading of the staff. It was a natural progression for me to fill in for him and in late 1999 the church membership elected me as their lead pastor. At times, I still find myself amazed to be in this position.

What is your typical day like both as a pastor and on a singing date?
As you can imagine, these two days are very different. As a pastor I am charged with overseeing our staff, tending to needs within our congregation, and doing my best to see that we are empowering and equipping the members of our congregation to do the work of ministry within our local church and community. This is a daily challenge and is never ending. Being a people person, I love the parts of the job that involve engaging people, regardless of what it is. I lean heavily on those with administrative gifts around me to handle the details of tasks or I can quickly find myself taking care of things that drain me of energy.

A concert date is a totally different animal. We generally travel by bus so a typical day has a certain flow to it. We arrive at the venue at anywhere from 7-8 a.m. The road crew begins the setup for the concert and we are taken by a runner to the hotel. Usually we use the mornings and early afternoons for study, workout, or taking care of work things at home via the computer. Usually there are interviews to promote either that night’s concert or a coming concert from 1-3 p.m. At around 4 p.m. we start our soundcheck at the venue. That usually lasts an hour or so. From that point on there is a blitz of activity that includes meet-and-greets, dinner with selected guests or area pastors, pictures ahead of the concerts, and then the concert itself. After the concert we usually sign some autographs, pose for some pictures, and then change clothes and get on the bus for a night’s sleep as we drive to the next city.

What is the most interesting thing you’ve done throughout your career?
This is a very difficult question. After 25 years, we have had many interesting days. While singling out one is difficult, I suppose I would have to say that leading worship for a tour that went to Israel was one of the highlights. One of our big hits early on was a song called, “Mercy Came Running.” We stood on the south steps of the city of Jerusalem and sang that song. The first verse is written in reference to the temple in the Old Testament. The words to the first verse are, “Once there was a holy place, evidence of God’s embrace; and I can almost see mercy’s face, pressed against the veil.” It was a surreal experience to be singing that song and be only a few hundred yards from the place where the old temple stood. It was a profoundly moving experience. We led worship in a boat on the Sea of Galilee, in the Garden of Gethsemane, at the place where the Sermon on the Mount supposedly was given, and at the Garden Tomb. I cannot begin to describe the myriad of emotions I experienced.

What is something you wish people knew about you?
I am basically a shy person. People see me on stage or speaking and naturally assume that I’m a really self-assured, in control, and outgoing sort. I am, in reality, fairly insecure about being on stage and in front of people. While I enjoy singing and performing onstage, the speaking part has been quite challenging. It has definitely pushed me out of my comfort zone.

Who has had the greatest influence on you?
Probably my greatest influence musically was a Gospel artist by the name of Andrae Crouch. I was introduced to his music when I was in high school and remember being transported on a spiritual journey when I first heard his music. I probably listened to every album of his numerous times. He recently passed away but the songs he penned are still being sung today and will be for many years to come.

Describe an on-stage blooper you’ve experienced.
We were about six songs into a concert one night while singing at a concert in Parkersburg, West Virginia. A teenage girl came rushed down to the front of the stage and motioned for me to come over. I was thinking, “Wow, this doesn’t happen often. What could this be about?” As I made my way over, she mouthed the words, “Your zipper is down!” Since that night, we go through the checklist every night before we go on stage with the acronym ESPZ: Energy, smile, pitch, zipper.

Carrollton in a word?
“Diverse” I have fallen in love with the City of Carrollton. The diversity of the city is amazing. So many different races and cultures represented.

What is your favorite food?
Asian … I could probably eat it every day of the week. However, running a very close second is Tex-Mex.